In 1862 a school conducted by T. C. Camm, had begun in the first Methodist church (97 Main Street).  Each pupil paid a weekly fee. Camm was succeeded by E. Hall and D. Cook, but returned in 1865 as Head Teacher of the new Common School in Presbyterian Church.  This was the bluestone building now known as St. Andrew’s Sunday School Hall.
In 1923 the Presbyterian Church purchased the building and land at a cost of £824/10/-. The building was then insured for £1000.  This purchase took place after the present school opened in February 1923.
Pupils finished at the old school in December, 1922 and began at the new school in February 1923.  Pupils remember playing football in the playground which extended back to Coulston Street.
Wood fires were used in the classrooms and out in the yard a tank was positioned which continually burnt papers and rubbish.  Pupils used a pointed piece of wire called an ‘emu stick’ to collect papers from around the school ground.
The Head Master lived in the school residence at 55 Main Street, sited where the Beeac Garage now stands.
The Beeac School had a large attendance at this time with a thriving township and many children came by gig or horseback from outlying farms, whilst others walked.
In the early 1900’s an additional red brick room was added at the rear.
When St. Michael’s School opened at the other end of town, a number of Catholic children transferred from the State school and student numbers declined. 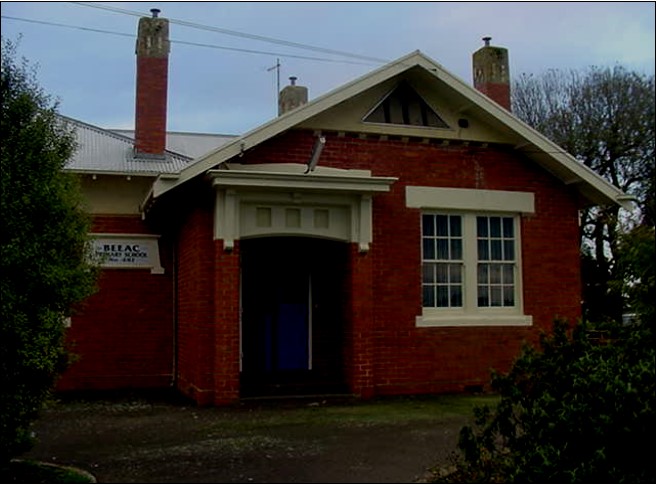 Beeac Primary School has been educating the children of Beeac, Cressy and surrounding districts for over 150 years. Though much has changed in the way we educate our children in that time, one thing remains constant: Beeac PS is the little school where big things happen!